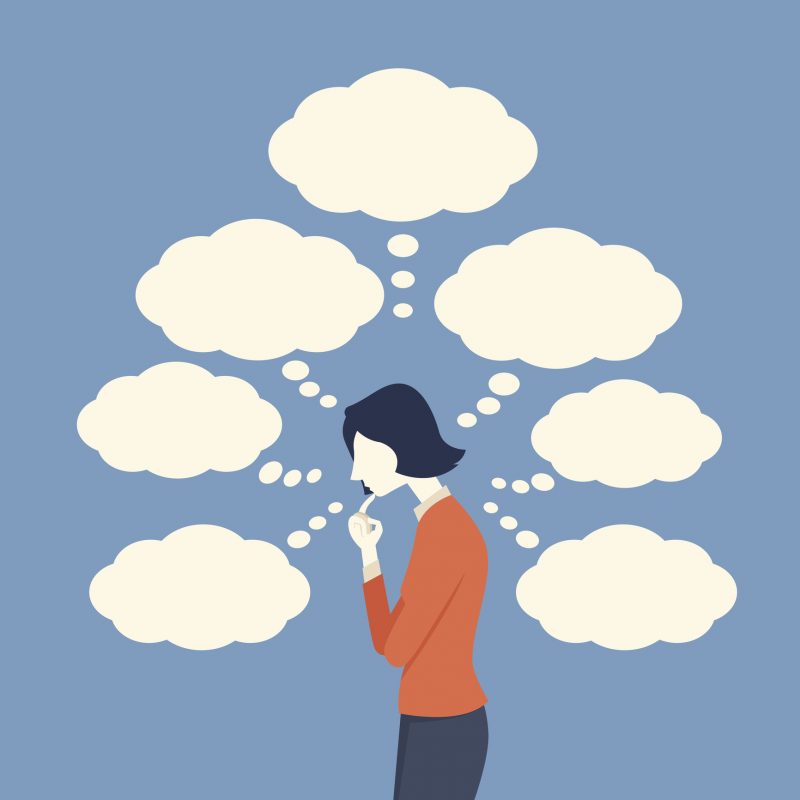 A feeling of apprehension and fear characterized by physical symptoms such as palpitations, sweating and feeling of stress.(William C. Shield Jr.)
Anxiety is not a completely disorder this is result of negative thoughts and fear. Stressful life, events, death of loved one, over thinking and excess workload in working place, financial (low socio economical condition) is leading cause of anxiety. Thinking is not a problem if conflict is absent, thinking should be normal neither more excited nor more relax.
Some peoples are worried for everyday situation, they have not feel comfort and all time travel with negative thoughts. Where anxiety is worry about future events and fear is reaction of currents events. Anxiety disorder is more in women than men.
Anxiety is more common among school and college going students. Anxiety has become very common among students today. Problem of anxiety is increasing day by day. Students want to get everything very quickly; this is a one of more common cause of anxiety. Now a day students do not have patience. If their demand is not met they get angry. Some students are upset when they get low marks in exam and some are go to addiction for saying no to their partner. Now a day students ignore parents completely in front of friends. Some anxious students adapt wrong habits with friends in college (use drug or alcohol for feel to relax)

Anxiety is a result of stressful life or events who occur in past and which effect on future others factors can cause of anxiety including emotional factors, health issues (long time illness),side effect of drugs & alcohol ,brain chemistry, environmental factors, social factors, divorce. Emotional person is more affected to anxiety.(1)
According to epidemiological surveys one third of population is affected by an anxiety disorder during their lifetime.
Our mind every time think and produce lots of thoughts, some are useful and more motivational but some thoughts are many dangerous because they produce conflict.

STATEMENT OF THE PROBLEM-:

Anxiety disorder is more common in students and deeply affect to their life. Anxiety is frequently occurring most common public health problem. Due to anxiety disorder many students have loss of life. Fear and anxiety also affect the personal, professional and social life. Anxiety is also a initial stage of depression, if anxiety disorder has stay long time not manage then students easy convert to depression.
Anxiety is an emotional characterized by feeling of tension, worried thoughts and physical changes like increased blood pressure. People with anxiety disorders usually have recurring intrusive thoughts or concerns. They may avoid certain situations out of worry. They may also have physical symptoms such as sweating, trembling, dizziness or a rapid heartbeat. (Adapted by encyclopedia of psychology).
EPIDEMIOLOGY-:
Globally as of 2010 approximately 273 million (4.5% of the population) had an anxiety disorder .it is more common in females (5.2%) than males (2.8%).In Europe, Africa and Asia, lifetime rates of anxiety disorders are between 9 and 16 % and yearly rates are between 4% and 7%.In general anxiety disorders represent the most prevalent psychiatric condition in the US outside of substance use disorder (2).

-:
ANXIETY-: A feeling of worry or fear, especially about the future.
DEPRESSION-: depression is a mood disorder that causes a persistent feeling of sadness and loss of interest.
STRESS-: Stress is the body’s reaction to any change that requires an adjustment or response.
Fear-: an unpleasant emotion caused by the threat of danger, pain or harm (Lexico).
REVIEW OF LITERATURE-:
Anxiety is most common symptoms of the hidden, ignored emotional issues. Anxiety disorders are partly genetic but also due to drugs use including alcohol and caffeine. There are various form of anxiety disorder including generalized anxiety disorder, phobic disorder and panic disorder while each has its own characteristics and symptoms (3).
There are other psychiatric and medical problems that may mimic the symptoms of and anxiety disorder such as hyperthyroidism (4).
• Hot and cold flushes
• Racing heart
• Tightening of the chest
• Snowballing worries
• Obsessive thinking and compulsive behavior
Stressful events can also trigger symptoms of anxiety common include-
• Job stress or job change
• Change in living arrangements
• Major emotional shock
• Family and relationship problems
• Verbal, sexual, physical or emotional trauma
• Pregnancy and giving birth
• Death or loss of a loved one

GAD is a common, chronic disorder characterized by long lasting anxiety that is not focused on any one object or situation .Those suffering from generalized anxiety disorder experience nonspecific persistent fear and worry and become overly concerned with everyday problems. According to Schechter, Gilbert and Wegner’s book Psychology: Second Edition, generalized anxiety disorder is characterized by chronic excessive worry accompanied by three or more of the following symptoms: restlessness, fatigue, loss of concentration, irritability, and sleep disturbance. GAD is the most common anxiety disorder to affect the older adults.
Anxiety can be a symptom of a medical or substance abuse problem and medical professionals must be aware of this. A diagnosis of GAD is made when a person has been excessively worried about everyday problems for six months or more. Before a diagnosis of anxiety disorder is made, physicians must rule out drug induced anxiety (more common in students) and other medical causes.

The single largest category of anxiety disorder, which includes all cases in which fear and anxiety, is triggered by a specific stimulus or situation. Between 5% and 12% of the population worldwide suffer from phobic disorders. (6)

With panic disorder, a person suffers from brief attacks of intense terror and apprehension, often marked by trembling, shaking, confusion, dizziness, nausea and difficulty breathing. These panic attack defined by the American psychiatric association as fear or discomfort that abruptly arises and peaks in less than ten minutes, can last for several hours. Attacks can be triggered by stress, fear, or even exercise, the specific cause is not always apparent.

Obsessive-compulsive disorder is a type of anxiety disorder primarily characterized by obsessions (distressing, persistent, unwanted and repetitive thoughts, images or ideas) and compulsions (repetitive behaviors, and urge to repeat over and over).it affects roughly 3% of the population worldwide. Symptoms gradually and vary throughout life.
According to NIMH Obsessive-compulsive disorder is a common, chronic, and long lasting disorder in which a person has uncontrollable, recurring thoughts (obsessions) and behaviors (compulsions).
POST –TRAUMATIC STRESS DISORDER ( PTSD)-:
Post –traumatic stress disorder is an anxiety disorder that result from a traumatic events, experience, such as natural disaster, sexual violence, child abuse, and combat or even a serious injury or accident. It can result of chronic exposure of severe stressor. It is thought to affect between 7 and 8 percent. PTSD can disrupt life for years.
According to APA and DSM-5 have set a criterion for a person who receives a diagnosis of PTSD, the person must:
Have been exposed to death or threatened death, serious injury, sexual violence through witnessing it, by it happening to a loved one, or during professional duties.
Experience the following for more than one month: one or more intrusion symptoms (nightmare, flashback or fearful thoughts), avoiding situations that remind the person of the event, feeling of guilt and blame, having reduced interest in life, difficult in concentration.

Situational anxiety is closely related to people comfort zone. Some people become anxious in working place or new community, and students have more affected after changing the school or college.
Situational anxiety is caused by new situations or changing events. Its occurrence is very common. For example-some people become uneasy in crowd or tight space, so standing in a tightly packed line, may cause them to experience extreme anxiety, possible a panic attack. Others however may experience anxiety when major changes in life occur such as entering college, getting married, having children, etc. (7)
RISK FACTORS OF ALL TYPE OF ANXIETY-:
Child abuse, family history of mental disorder and poverty, stress due to illness, personality, drugs or alcohol (8).

There are no any specific measures to prevent anxiety disorder, only focus is increasing on prevention of anxiety disorder. Adaptation of healthy changing lifestyle and health diet is useful to reduce anxiety. Cognitive behavioral therapy is effective for anxiety disorders and is a first line treatment (10).

-:
• Avoid negative thoughts
• Whenever you feel uncomfortable you do the work of your choice (favorite’s activity like singing, listening or watching favorite channel).
• You should believe that you have a problem with anxiety.
• Take a deep breath at the time of anxiety and should stay in ventilated room.